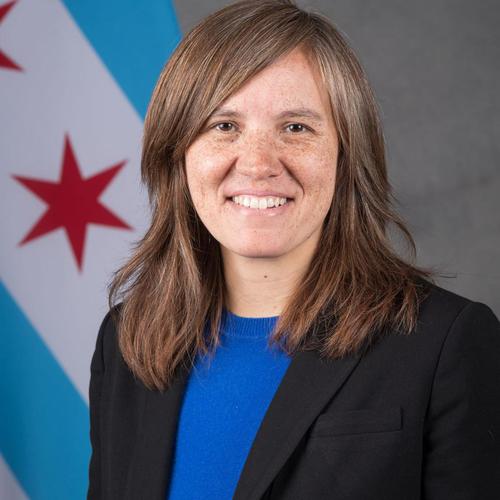 Sessions covered by this speaker

Day One Welcome and Opening Address

Bio for Gia Biagi, Commissioner, Chicago Department of Transportation Gia Biagi is an urban planner and designer with experience in the private and public sectors who was appointed Commissioner of the Chicago Department of Transportation (CDOT) by Mayor Lori E. Lightfoot in December 2019. The Mayor charged Biagi with implementing a vision for a transportation system that prioritizes equity and mobility and works to lower the economic and environmental burden of transportation on residents and communities, especially for people in poverty and people with disabilities. As Commissioner of CDOT, she oversees a department responsible for Chicago’s roadways and bridges, sidewalks and bike lanes, the citywide bike share system, traffic signals and signage, streetlights, the permitting of activities in the public right-of-way, and policies focused on complete streets, climate adaptation, and new mobility. Before answering Mayor Lightfoot’s call to return to public service, Biagi was a Principal at Studio Gang Architects, one of Chicago and the world’s leading architecture and urban design firms. At Studio Gang, she developed and led the Urbanism + Civic Impact practice that specialized in urban design, planning and strategy. The work centered on how to move toward equity, mutuality and positive change in cities by working with a range of partners including community-based organizations, cultural institutions, developers, government, and other public and private groups and individuals. Prior to joining Studio Gang, Biagi spent more than a decade in public service as a planner for the City of Chicago, with roles that included Chief of Staff for the Chicago Park District, as well as with the Department of Planning and Development. Much of her work for the City focused on neighborhood revitalization through planning, programs, policies and capital investments in our park and recreation system, a network that touches nearly every corner of the City. Biagi attended the University of Michigan for her Bachelor of Arts Degree and has a Master’s in Urban Planning and Policy from the University of Illinois at Chicago.

Your logo could go here!

If you'd like to get your brand in front of attendees following the categories this speaker is talking about (on this page, via email and during each talk) contact us.
We use cookies This website (and some of its third-party tools) use cookies. These are important as they allow us to deliver an exceptional experience whilst browsing the site. Learn more about our cookie policy. By closing this banner, scrolling, clicking a link or continuing to browse, you agree to the use of cookies. Accept
I need help
No I need help
No I need help